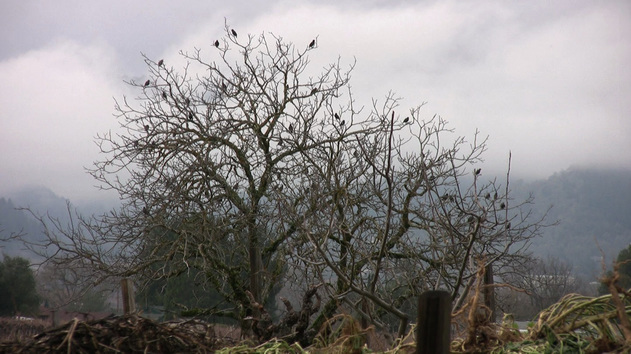 Staerlinc is an old English name for the Starling bird. This film records the experience of observing a flock of starlings in the vineyard during Winter. These birds are regular visitors to this vineyard and also relatively recent US immigrants. Transported into the United States from Europe in 1890 by a wealthy American businessman, the starlings were part of this man’s dream to introduce all of the birds referred to in Shakespeare’s plays. He released the first 60 starlings in New York’s Central Park and there are now more in the United States than any other country in the world, numbering in the millions in California and 200 million countrywide. The film records the ways in which the visiting starling flock move through and around a leafless walnut tree on this particular acreage.